Well, as you might expect, it depends. What environment will you be shooting in? Are we talking indoors or outdoors? What ammunition are you looking to use? All these factors play a part and more so with an air rifle because you’re using pellets, not bullets. And pellets don’t behave the same way as bullets. If you account for these factors, you’re on the right track. And we’re here with our guide to help you along the way.

First – We Need to Zero in Your Scope 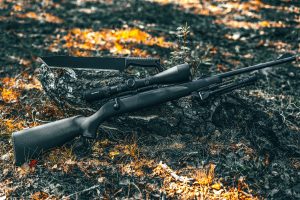 Yep, you need to hone those sights and make sure that your pellets are in the ballpark of your target. You can’t do that without a little test firing first and for this, you need to be closer than your target distance. 15 yards is a good starting point. Set up shop, make sure you’ve got a sturdy base to shoot from, then fire a couple of rounds at the backstop. If you hit the target, great. That means you’ve got a starting point. If not, move closer and fire again. Once you’ve got a visual of where your rounds are landing, you can then start to make adjustments, so that you’re moving closer and closer to the bull. Keep firing, keep honing, and eventually, you’ll have a base to work with. Essentially, if you’re firing groupings within a 10mm circle around the bull, then you’ve done the job. It’s at this point you can switch it up and move to your target distance.

If you’re indoors, then you’re likely to be engaging in close-range shooting. We’re talking around 20-25 yards and that usually means you can hit the target without having to make any adjustments whatsoever (if you’ve zeroed in your sights correctly). You may have heard of the term ‘point-blank-range’? This scenario is the epitome. If you do make adjustments to your scope, then it’s likely at that sort of range that you’ll be shooting pellets right over your target rather than dead-on.

This sort of range strikes a good balance between short and long-range shooting. If you set your zero distance to around 30 yards, you should be able to flit between the two without much of an issue (if you’ve carried out some initial zero distance work). The key thing to remember in middle and long-range shooting is that you’re likely to be outdoors and having to contend with the wind. You’ll need to account for that when targeting. The pellet will also significantly arc at this sort of range so you’ll need to account for holdover too. 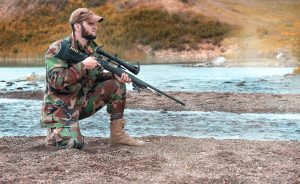 At this sort of range, you’re looking at midpoints. So if you’re shooting from 30 – 50 yards, you want to be zeroing in at 40 for example. Obviously, there’s a limit. The pellet will lose momentum which means that there’s only so much distance that it will cover, no matter the skill of the shooter or the altitude you’re shooting from. Again, holdover and wind direction will need to be accounted for in order to deliver a perfect shot.

Therein lies the rub. Every pellet type will react differently due to its weight and shape so with every new pellet type used, you’ll need to start the zeroing process again so that you’ve got the right zero distance for your chosen ammunition.

And Remember the Focal Plane!

Yep, with most scopes, you’ll get a second focal plane. What does that mean? It means that your zero distance only applies if you use the same magnification that you applied for testing. Change the magnification and it’s like changing the ammunition. You’ll have to start over and find the right zero distance for the new magnification.

That’s How You Find the Right Zero Distance

Remember – you’ll need to test your sights first and adjust them accordingly so that you’re consistently hitting rounds around the bull. Once you’ve got the zero distance, you can then adjust accordingly for short, middle, and long-distance shooting. However, the adjustments you make only apply if you’re using the same ammunition and the same magnification (if you have a scope with a second focal plane). If you change the dynamics, then the zero distance changes. You’ll also have to account for holdover and wind direction as you move to longer ranges and outdoor settings. If you’ve got all that covered, you’re good to go.

How to Sight In a Pellet Gun Scope

How to Use Nikon Bdc Scope in 6 Easy Steps!